PHOTOS: Bro. Capt. Hunter aboard his plane (left), getting his wings (top) and the JetBlue model he files 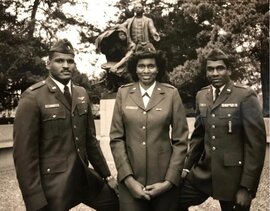 Vintage: Bro. Hunter (left) with colleagues
Bro. Terry Hunter of Gamma Pi Chapter always has his head up in the clouds. No, he is not being "uppity" and he certainly isn't lost in space. Yet, he does seem to have his nose "up in the air" quite a bit! That's because he flies high as a licensed air transport pilot for Jet Blue Airways, where he serves as a captain. Just to put this all into context, the planes he commands are a few steps up from "The Soul Plane!" A modern day Tuskegee airman as a graduate of the institution, Bro. Hunter has parlayed a distinguished career flying in the military into success as a commercial pilot, He is a captain for Jet Blue Airways where he flies the friendly skies operating the Airbus A320 and 321passenger jets. While he maintains his residence in the DMV, Bro. Captain Hunter is part of a flight crew based out of John F. Kennedy International Airport in New York City. Bro. Hunter was born in Donalsonville, Ga. and grew up on a farm in Jakim, Ga. He entered the U.S. Air Force out of the AFROTC at Tuskegee. He retired from the Air Force in 2004 at the rank of Major as a much-decorated officer, having had a stellar career of leading countless flying missions supporting military operations across the globe and serving as a lead flight instructor as well as a pilot evaluator. Bro. Hunter received numerous commendations in the military for flight training and leadership. Today he flies the Airbus 320 and 321 passenger aircraft. It's possible you have been or will be on one of his flights!

Win a free trip to see the Cowboys and Commanders in Dallas this fall! Get details here
Catch Us on Local TV: Community UPLIFT Wednesdays at 10 a.m. and 7 p.m. (Ch. 42 Verizon FiOS/ Ch. 76 Comcast)
​
Our Social Action programs are sponsored by Friendship Charities Foundation, Inc.

Or DONATE while you SHOP