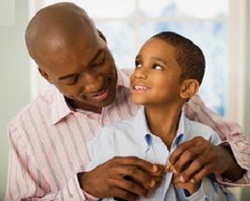 In fact, the Omega Psi Phi Fatherhood Initiative is so groundbreaking that the Fraternity has teamed up with the Obama administration in the White House Fatherhood and Mentoring Initiative. During Omega Psi Phi’s Centennial last summer, President Obama greeted Fraternity leaders in a closed-door meeting during which he lauded the organization for taking on Fatherhood. The origial idea for a Fatherhood and Mentoring Initiative actually began with a 2009 White House Town Hall on Fatherhood attended by an invited Omega man, Brother Thabiti Boone, who brought the idea back to the Fraternity at the Conclave held in Raleigh, N.C. in the summer of 2009.

Gamma Pi chapter's Fatherhood and Mentoring Initiative involves investing in the lives of the young juvenile boys housed a the Cheltenham Detention Facility in rural Prince George's County. In 2011, a group of Brothers from Gamma Pi chapter joined with members of other fraternities to visit with the young men and sponsor a half-day self-improvement seminar inside the facility. In 2012, members of the chapter will return to Cheltenham and conduct another seminar with the youth, this time emphasizing the responsibilities of Fatherhood and of being productive men in preparation for the role of fatherhood.

VIDEO: "5 Minutes with Gamma Pi" on the Cheltenham Project

Brothers after entering the security gate
As part of its Fatherhood & Mentoring work, Gamma Pi chapter is raising its commitment to the young men locked away inside the Cheltenham Youth Facility in its home county of Prince George's. Since the 2011 initial visit, the chapter has returned to the facility en masse two more times on its own, and the Super Chapter is now being asked by the administration to visit with the young men more often to continue its influential work to change young lives.

Many of the young men (teenagers) housed at the Cheltenham facility come from homes where there is no father figure, which may account for their behavior.  During visits, Gamma Pi men talk about goal-setting, education, proper dress, personal health and parenting.  Gamma Pi's mission in these visits is to demonstrate to the young men how they can envision a future in spite of their circumstances.