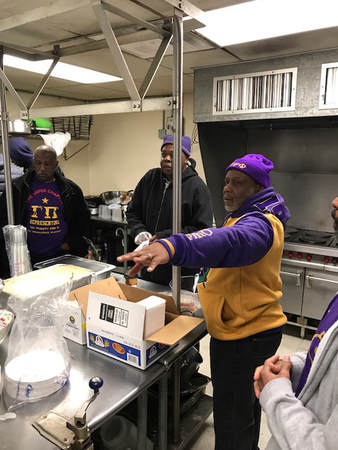 Preparing a Hot Meal for Shelter Residents
Located off the beaten path in Prince George's County are the shelters that serve as the "home to the homeless." They are places where women and children, and in some cases men, can come in from the devastation and dangers of the streets after suddenly finding themselves without anywhere to live, usually the result of domestic violence (women) or misfortune and luck. It may seem like a distant problem to many —  the prospect of being homeless.  It is hard to fathom. Hard to understand for the millions of Americans who go to sleep each night surrounded by four walls and a roof and who do not fear for their safety in their own homes.

But the fact of the matter is that millions more Americans are homeless at any given time, their lives upended often by nothing more than misfortune and circumstance. Nobody plans to become homeless. Gamma Pi understands that and every year, the Gamma Pi Omega Foundation supports the service project of the men of Gamma Pi chapter as a way to underscore the importance of supporting shelter residents.  The men of Gamma Pi see their work at local shelters not only as a service project, but as a response to a pressing need in the greater Prince George’s community. It is a duty and an obligation of humaneness. It is a duty and obligation according to the Cardinal Principle of Uplift.

The men of Gamma Pi chapter usually make the trek to the shelters during perhaps the coldest months of the year  The service projects are usually carried out on  a frosty, ice cold Saturday morning before dawn as the men of Gamma Pi bring warmth to the hearts and souls of many persons who otherwise would be left out in the cold literally and figuratively.

Scenes from our January 2018 Shelter Mission